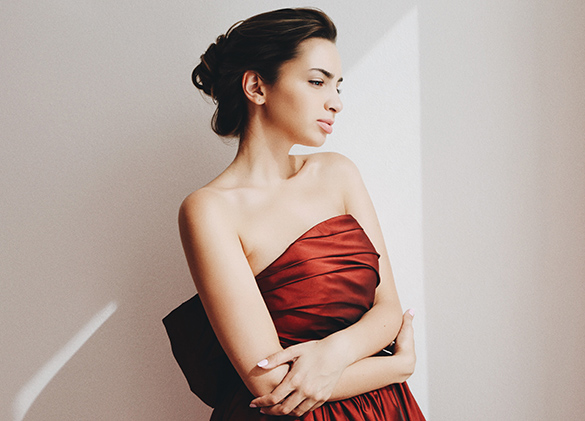 Ester Ustaeva was born in Saint-Petersburg. The music was part of the girl's life since childhood. Ester began singing at four years old. The love for music was everywhere: when she was little, she loved singing along with her favorite cartoon characters. And a year later, her parents decided to take her to a musical school. But because vocalism lessons begin later, she started taking pianoforte lessons first. Then began her studies in a musical lyceum at the director of choir faculty.

After her succesful studies in the lyceum, Ester joins Saint-Petersburg Conservatory of Rimskiy-Korsakov and ends with a red diploma.

While being a student Ester performs on the same stage with singers like: Eugene Akimov and Ildar Abdrazakov. Also, she takes lessons from Franco Paliazzi, in Florence. With great success, she gives concert with soloist of State Academic Mariinskiy Theater, Vladimir Samsonov, on stage of BCH "Octyabrskiy", in the program "In the reflection of stars". In 2015, Ester became a laureate of actor prize "Figaro". Together with State Saint Petersburg orchestra "Classika" under management of Alexander Kantorov, Ester goes on a concert tour around Europe, for the fifth festival called "Chaikovsky's empire". Ester constantly pleases the audience of Saint Petersburg with performances with Vladimir Samsonov at different stages and cultural events of the city. Repertoir of Ester is vast and different. She is equally great in opera and operetta, in most complex parts of musicals by A.L. Webber, and lyrical songs by I. Dunaevsky.

In 2016, Ester sings at her first solo concert at the academical capella with "Tavrichesky" orchestra, under managment of Michael Golikov. A special guest of that evening was people's artist of Russia, Maxim Dunaevsky.

In 2017, Ester performs with her solo program, in Cyprus. The singer constantly develops her talent and stage skills. She spent 2 months in New York at the educational program «The Chautauqua Institution Voice Department», with teachers from Curtis Institute of Music and Manhattan School of Music, Ester's mentor was Craig Rutenbers (Metropolitan Opera).

And in december of last year, Ester gave another solo concert at Academical Capella with "Youth symphonical orchestra of Saint-Petersburg".